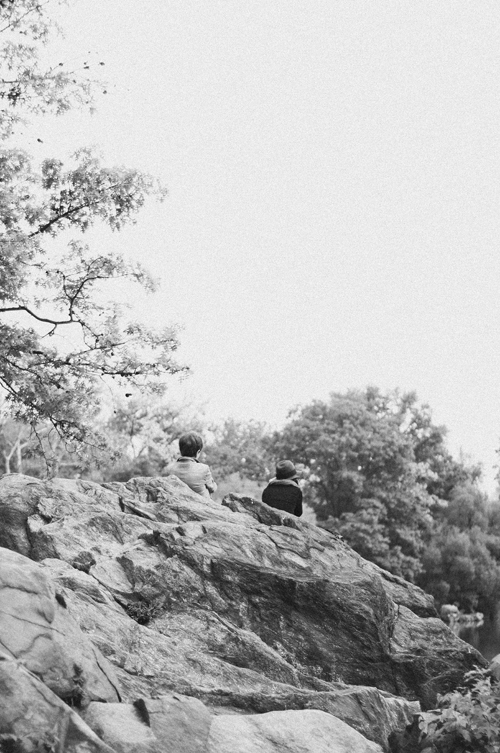 I have discovered that I can not write a blog post everyday. I have therefore accepted that fact and am okay with it. I have also accepted the difficulty of trying to keep posts that are not necessarily written on the day they are talking about {about our NY trip that is; notice I was trying to post with the name of the day and it's events; name of the day in French no less}.  For that matter I am a little sad and regret to inform that unless I can hammer out some sense of the chronological order of our adventures of the past few days, I'll be ditching that fun attempt at cute details and skipping to an easier route of documenting; although I am about to stubbornly prove that I can keep up with what has been going on... ...

Okay the last post was on 'un jour neuf' which technically covered last Thursday so that would make un jour dix Friday... okay I got this! Yes, okay so Friday I woke still feeling as fabulous as I did Thursday evening when I went to bed... ... um, did you see the post about Thursday???  The fabulocity quickly wore off and then I quickly needed coffee... *smile* and seeing that we didn't wake till around 10 or was it 11, I wanted to pull myself together and start the Friday! We headed out and stopped along the way at Zucker Bakery which instantly caught our attention when we saw the Stumptown coffee sign in the front window! DELICIOUS european inspired Zucker treats are made even better by the great taste in coffee and simple living-room like setting over on 9th street. Yum what a great find!

Next we headed to Central Park to see some more of the giant thing and just relax in the pretty Friday sun and people watch! We did all of just that! Then headed up to Yankee stadium as it was the big night, yes, it was 'Yankee's Game Night' as Nicholas had been excitedly referring to it. Yankee stadium is marvelous I feel I need to just lay it out there and say it as it is, yes, it. is. marvelous. I had some of the best pulled pork ever! We had great seats! We bought Yankees caps! We even got to see our own 'home' team as they were in fact playing the Mariners... can you guess who won? *smile*

So overall we had a lovely Friday! Then that puts us at Saturday or un jour onze. So Saturday could really take up about 6 posts I am sure so here I am going to throw it all into a nutshell:
- Day started by us both rushing because we were given unclear information about the Manhattan Classic Cocktail Crawl that we had purchased tickets to for that afternoon/evening; Nicholas rushed to the dry cleaners, I rushed to get my nails done.
- I receive an email stating that we need not rush and more of the details to the evening's events.
- Now with extra time, I embark on a search for false eye lashes.
- With what I thought was a load of extra time and seeing that a park I had passed a few times that usually  was locked was actually open, I stopped in for about an hour and sat in the sun and relaxed.
- Got home and made us a rather fabulous brunch spread.
- Started to get ready and realized that I needed a different false lash glue; Nicholas runs out.
- Oh my now I am starting to rush.
- Really rushing now to get ready as of course things start becoming difficult, 'things' being my hair...
- Finally am done and we get in cab to go check-in at our said check-in spot for the cocktail crawl.
- Get to check-in bar to discover the information and details we had been given were completely in correct and we no had missed the whole event.
***EVENING QUICKLY TAKES A TERRIBLY TURN***
- We decided to just do the crawl as we would have anyhow and discover it's no fun at all when you are by yourselves in bars that empty and two very cranky people.
- I somehow avert a total breakdown thank you me.
- Bored. Boring evening. Dissapointed. Dawned in total new black tie attire. Running around town now without the fun of being in a 'crawl'.
- The Libertine was nothing special and so we left. Although the signature crawl cocktail was delish and the artist/bartender a sweetie. We did take a few fun instagram photos of our outfits upon leaving; since so much effort did go into the darn things.
- Next we went to Ace hotel which the NYC Ace is KILLER! The Breslin is the bar which would have been WAY more enjoyable but I had already admitted defeat and was therefore an uber sad girl with a similarly sad boy.
- Next we went to the Empire State building; RAD! And to The Empire Room; NOT RAD! Actually we both decided it would have been unparalleled to anything else back in, oh let's say 1962 most likely. Now it was a beautiful space with mere tourists and bizarre staff that were prepping for the place to turn into a club. So. Unfortunate. Where is the Delorean when you need it most?!? We were even dressed as they would have been in 1962 to go out for cocktails... the epitome of a 'timing dilemma'!
- Now hungry and wanting to avoid the problem you have when you drink and don't eat, we head out to the street to catch a cab...
- Empire Building = by Madison Square Garden. Madison Square Garden = Rangers game getting out. Rangers game getting out = Nicholas and Cozbi walking FOREVER to catch a cab.
- Decide to just ditch the makeshift cocktail crawl and try to remedy the situation with a really fab dinner; go to the Waverly Inn.
- People watch; the Waverly Inn is known for both its wonderful menu and food AND it's celebrity crowd; nope didn't see any celbs but did have some great food and were seated next to a very interesting/entertaining couple.
- Go home and end the dang day.

Sunday would be un jour douze {hey I figured this all out hooray!}. I woke and went to Sunday worship. Came home and then prepped to head up to the upper upper Westside to meet a very adorable couple for some engagements at The Cloisters. Nicholas woke to join me for that. Man o man that was one GREAT Sunday afternoon! Fort Tyron Park is sensationally beautiful as are Robyn and Micheal whom of which are having their wedding next Saturday; so thrilled for that! Photos went spectacularly as did making new friends that ended up treating us to a grand Italian dinner where we sat on the patio and had wine and talked for hours. A near perfect Sunday it was!

*above photo from the day we went to the Museum of Natural History; after we spent some relaxing time at Central Park {which I often now just call 'the park'}. I snapped quite a few photos but for now will just share the above image of two people sitting atop the bluff looking out over the little lake and watching the turtles and geese amongst the city reflection... I found the image of them and their own enjoyment of the afternoon to good to resist and therefore took a few photos of them...
Email Post
Labels: Personal Travel