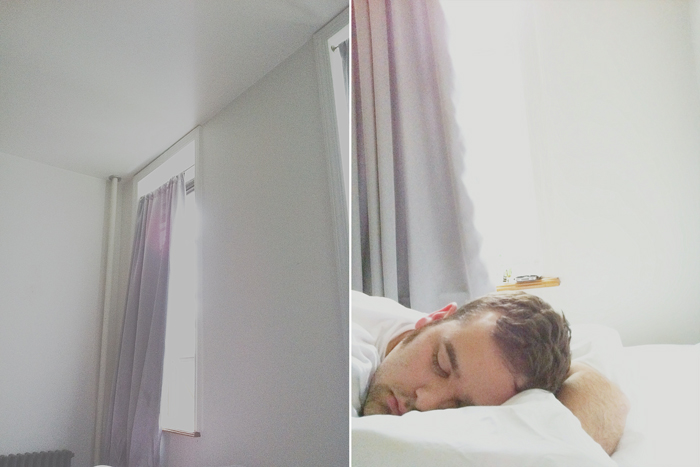 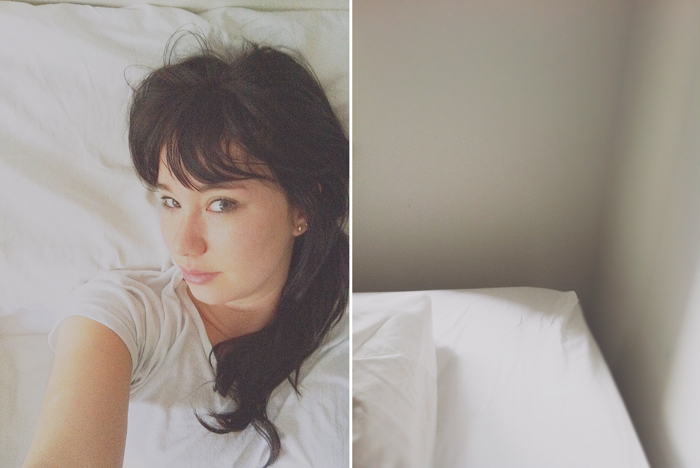 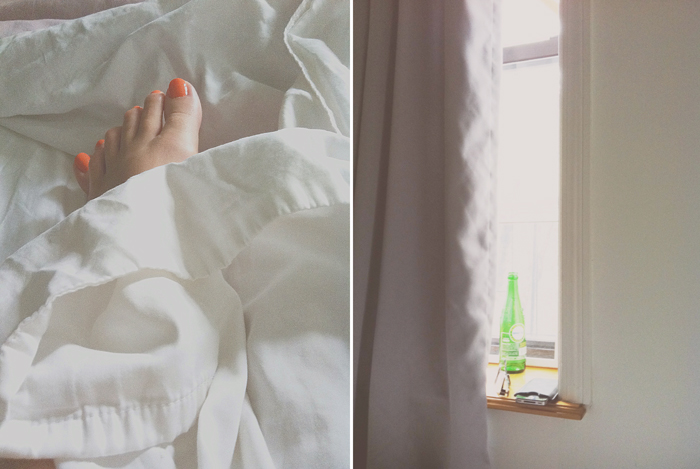 Day one or 'un jour une' is among Nicholas and I here in New York! Yesterday was our travel day which for me started, or rather rolled right off of Monday as I pulled a full all-nighter prepping work, transferring files, doing laundry, packing and lord knows everything else. Yes of course I totally got my nails done {lovely shellac that is the color of unbleached clay; a very cool grey! right up my alley!} and I totally shot a wedding Monday as well. Indeed a wild past few days but nothing that I couldn't summit!

Anyhow yesterday's travel day, although desperately wanting to be sickeningly awful very quickly, was rather pleasant! I would not let be anything other! And neither would Nicholas! We arrived around 6am at the airport and immediately had a luggage debacle as our items to be checked were shockingly overweight. Ironic I thought since we both have lost a considerable amount of weight and radically adjusted our lifestyles {Nicholas as reached a loss of around 25 and myself 12 added we are eating uber healthy and working out like we'll be competing in the Iron Man; okay maybe not that good of working out but still a 99% workout improvement from our previous selves.} Anyhow, ironic I thought that we again and so quickly were having a 'weight' problem, although one that could be remedied within just a few minutes. Losing 25 lbs being a fix that typically requires much more time, was changed in a mere 5 or so minutes.

After the luggage issue I inquired about the other major problem with our second leg of flight that being that we didn't have seats together. Initially the only thing available was two seats in front of each other in the back last two rows of the plane. Gross. Depressing and gross. Even worse for someone who for some reason is a real terrible flyer as of late. No I was not at all going to settle for those terrible seats! Well, this problem too was remedied very quickly. We were able to change to the emergency row which for us ended up being row 9 {woohoo nearer to the front!}. That leg from LAX to JFK was the best flight I've had a very, very long time. Turns out I do wonders in the emergency row. I suppose the comfort of knowing I'll be the first off in the actual case of an emergency is great for my spastically fearful flying psyche. And as my groom last weekend who is also a pilot advised me, it is also the most balanced area of the airplane therefore receiving the least amount of turbulence. Truly, everything about my usual flying demeanor was totally bipolar yesterday and I was one fabulous jet setter! Hardly no nerves; I even threw my hands up and just enjoyed the steep take off that LAX requires. And no, I was not under the influence! Nope totally sober! Well, that may have changed just a bit...

With about 2 hours left on our second leg I got up to use the restroom and the flight attendant who was also on our first flight, he asked how I was doing. Filling him in on how I was expecting my stupid fear of flying to once again debilitate me and how just the opposite was happening, I ended by facetiously joking about how usually alcohol is my best friend for calming my fear. So excited to hear that I had at least temporarily conquered my flying problem, he then said, "Well then we of have no choice but to celebrate this successful flying adventure!" Two complimentary double whiskey gingers later it was clear to Nicholas just why I love Virgin America so much! *smile*

JFK was a breeze, caught up with our driver, drove mesmerizingly over the Brooklyn Bridge with the ease of how we would ever so casually drive across the West Seattle Bridge back home; however we were like little kids gawking out each sides of our back seat with eyes of the size of saucers and our iPhone cameras snap, snap, snapping away. Made it to our apartment early and our driver graciously obliged to our nervous hesitancy on simply waiting, luggage in hand, for our landlord to arrive at the agreed upon time almost an hour later. All was well though. We got in the apartment and unpacked and ordered from the local organic Thai place from which we received some delicious, fresh, very well portioned servings of pad thai and veggies and pork buns all of which was a mere total of $26 which we thought/were amazed at!

Now, let's be honest, the time change killed us today. That and for me my crazy lack of sleep. Therefore today we slept till around 12/1pm. Then made our way to what is now our home away from home, Ninth Street Expresso where we have been working all day {I'm hoping to bust out all my latest work and get caught up!}. A rather funny occurrence happened and I suppose you could say we have had our first 'celebrity sighting'... ah a story for another post...

It's my anticipation that I post everyday while here. Dear friends and family and for that matter anyone else, please, please feel free to comment below {Mom: all you have to do is make an account with google similar to how you have your Juno account and then you can comment!} I'd love to hear any of your NYC stories or recommendations on where to go or do or see... And please again bear with my wordy writing... I know it's not perfect but neither is how I talk in real life so there. *smile*

*above images via my iPhone and my way of capturing the perfect essence of today, un jour une.

**yes I die over the pretty light in there!
Email Post
Labels: Personal Travel