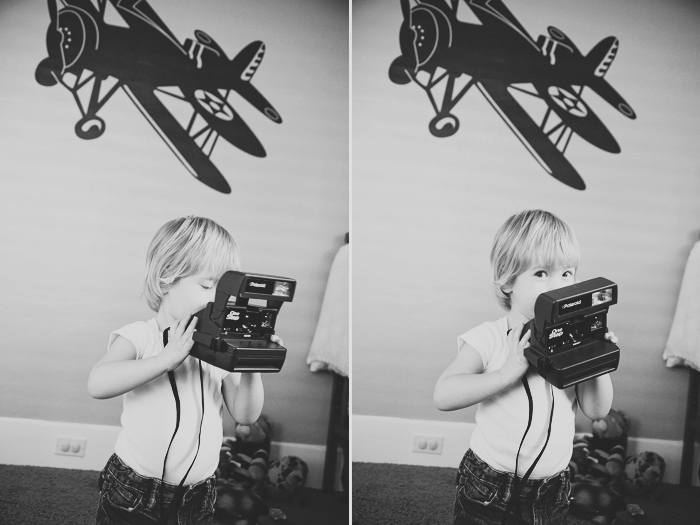 Meet Thor. I photographed him and his cousins about two weeks ago. We had been shooting/playing for around an hour and he all of a sudden ran out of the play room with a look indicating a light bulb had just gone off... with the pitter patter of little feet here he came rounding the hall corner with an old Polaroid camera he had scouted and then swiped from somewhere, who knows where, in the house. And of course, I died. Not only have I recently totally taken up a rather severe obsession with the things, but I was flabbergasted that this little guy saw me and what I was doing and very clearly wanted to do the same! Two years old and here is this little flirt totally finding a common ground.

I don't think I've ever adjusted my ISO faster so that I could make sure to capture him experimenting with the thing. Fortunately I caught the two above photos {two out of around eight rather comical frames} of him both inspecting and then trying out his new toy. Of course, from when he initially left the room, returned with the Polaroid, showed it to me, tested it out, discovered it didn't do much, I took the photos, and then he exited, it was a total of oh, I don't know, 1 minute thirty seconds? Oy... got to shoot quick with kiddies!
Email Post
Labels: Bebe